The unbearable darkness of loneliness : a biocultural approach to loneliness and death in Jean Rhys’ Good Morning, Midnight 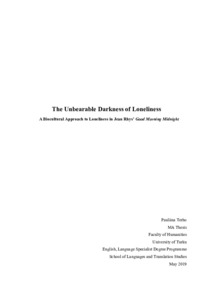 Examining loneliness in literature through a multidisciplinary biocultural approach, integrating research findings from multiple fields, can provide otherwise unachievable knowledge about the behavior and feelings of a literary character.

In this thesis I examine the loneliness experienced by the protagonist in Jean Rhys’ 1939 novel Good Morning, Midnight. By utilizing research findings from such fields as neurology, evolutionary psychology and pharmacology I demonstrate how the effects of loneliness are evident in the portrayal of the behavior of the novel’s protagonist and argue that loneliness is the underlying cause of the protagonist’s demise.

Although often viewed as simply an older version of Rhys’ female protagonists, I argue that Sasha Jensen differs from them significantly. She is not financially dependent on men and does not exploit her sexuality for financial gain or security as the other protagonists do. Also, the national identity of the protagonist is not essential to the novel’s plot as it is in Rhys’ other novels.

In addition, I illustrate how the theme of death is present throughout the novel and how it provides clues to validate the interpretation of the novel’s ambiguous ending as Sasha’s death.