If it Weighs as Much as a Duck, it’s Made of Wood, and Therefore a Witch : Direct and Indirect Accusations of Witchcraft in Depositions of the Salem Witchcraft Crisis of 1692 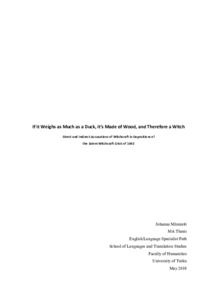 The material for this thesis comes from the original depositions that have survived from the Salem witchcraft crisis of 1692. The aim of the thesis is to show that the depositions contain both direct and indirect accusations of witchcraft, analyse how these are realised in the source material, and discuss trends emerging from them.
The theory part of the thesis discusses how what we say is not always what we mean, and proves that there is a credible base to determine some accusations as direct and others as indirect. Main tools used are Grice’s Maxims and the Cooperative Principle, the concept of implicature, and Searle’s Speech acts.
The analysis of the material shows that there are several different ways to make direct and indirect accusations in the depositions, that gender has more bearing on the accusers than the accused, and that young women are both more likely to give depositions, and also directly accuse individuals of witchcraft. In the scope of the work it was found that an accused individual was more likely to survive the crisis if a) all or b) none of the accusations made against them contained direct accusations of witchcraft.