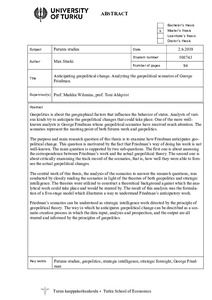 Geopolitics is about the geographical factors that influence the behavior of states. Analysts of various kinds try to anticipate the geopolitical changes that could take place. One of the more well-known analysts is George Friedman whose geopolitical scenarios have received much attention. The scenarios represent the meeting point of both futures work and geopolitics.

The purpose and main research question of this thesis is to examine how Friedman anticipates geopolitical change. This question is motivated by the fact that Friedman’s way of doing his work is not well-known. The main question is supported by two sub-questions. The first one is about assessing the correspondence between Friedman’s work and the actual geopolitical theory. The second one is about critically examining the track record of the scenarios, that is, how well they were able to fore- see the actual geopolitical changes.

The central work of this thesis, the analysis of the scenarios to answer the research questions, was conducted by closely reading the scenarios in light of the theories of both geopolitics and strategic intelligence. The theories were utilized to construct a theoretical background against which the analytical work could take place and would be steered by. The result of this analysis was the formulation of a five-stage model which illustrates a way to understand Friedman’s anticipatory work.