Ethos, Pathos and Logos : a Comparative Study of the Rhetorical Strategies Found in CEO Letters in English Annual Reports of Finnish Companies after Desirable and Undesirable Financial Years

Ethos, Pathos and Logos : a Comparative Study of the Rhetorical Strategies Found in CEO Letters in English Annual Reports of Finnish Companies after Desirable and Undesirable Financial Years 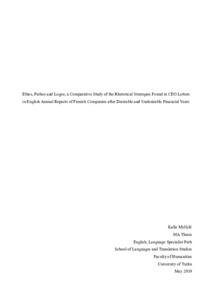 The corporate annual report is a tool of corporate communication by which corporate image, brand, reputation and social responsibility are maintained and improved. Rhetoric, more specifically organizational rhetoric, is utilized to pursue these objectives by persuading the important stakeholders to take a desired action or remain inactive.

Within the corporate annual report, a section called CEO letter has attracted number of studies due to its characteristic of summarizing the whole of the report in the words of the CEO (Chief Executive Officer). In this study, eight CEO letters of corporate annual reports of four global Finnish companies were studied. Four of the letters addressed a financially undesirable and four letters a financially desirable year. To conduct the analysis, I used a close reading method complemented by rhetorical criticism to uncover rhetorical constituents that corresponded to the modes of persuasion – ethos, pathos and logos. Ethos refers to the general, persuasive credibility of the rhetor. Pathos focuses on evoking such emotions, values and needs in the audience that enable persuasion. Logos persuades the target audience by utilizing fact-based reasoning.

I set out to answer two questions in this study. First, in what linguistic forms do ethos, pathos and logos manifest in the texts. Second, does there seem to be a tendency of a certain mode to appear in a text that addresses either an undesirable or a desirable financial performance. The second question also formed my hypothesis for the study. I assumed that logos-based rhetoric would be emphasized in the letters that address financially desirable years. Moreover, I assumed that rhetoric based on ethos and pathos would be dominant in letters that address undesirable financial performances.

However, the results of the analysis did not correspond to the hypotheses of the study. There did not appear to be a clear difference in the use of the modes between letters addressing undesirable and desirable financial performances. Instead, logos was strongly present in both types of letters and comprised mainly of financial and operational (non-financial) references. While not as strongly present, also constituents for ethos were found, mainly manifesting through the use of active voice and complemented by logos. Finally, pathos stemmed from the lack of negative words and an abundance of positive words, hence correlating to the Pollyanna Hypothesis according to which positive words are recalled better and tend to be emphasized in human interactions.

While the results of the analysis were different than was hypothesized, the study demonstrates the multilateral nature of rhetoric concerning the modes of persuasion. That is, they tend to appear together, enabling their persuasive potential. Also, the study illustrates why rhetoric is not only ‘empty talk’ but rather a tool in providing value to a business and its key stakeholders. Further research could focus on promoting the target audience(s) from static ‘objects’ of rhetoric to active partakers in the persuasion process.