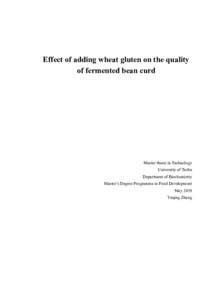 Wheat gluten is a source of high-quality protein with a wide range of sources. It has unique viscoelastic properties and high amino acid content such as glutamic acid and arginine. Fermented soybean curd is a long-established traditional food that has an important market share in condiments. In this study, the modified gluten was treated with hydrochloric acid to improve its solubility, and it was added to traditional fermented bean curd to obtain a new type of fermented bean curd. It is expected to improve umami taste and texture of the curd.

An Agilent 1100 HPLC system with UV detector and ODS Hypersil column was used to analyze the free amino acids. A Thermo Scientific ISQ GC-MS system equipped with a 75 μm CAR/PDMS SPME fiber and DB-WAX (30 m×0.25 mm×0.25 μm) column was used to analyze the volatile compounds. A Fox 4000 electronic nose system equipped with Autosampler and Software Control Instruments was used to compare the difference between samples. The analysis of volatile compounds revealed that when wheat gluten added, the flavor tends to have more kinds and contents of esters.

Compared with traditional fermented bean curd, the samples added with wheat gluten showed an increase in free amino acids content, especially of umami amino acids (glu and asp). And they had a significantly higher lightness of surface color and higher peptides contents. Among the volatile content, the number of esters was increased more than 10. The hardness and chewiness were decreased and the springness and cohesiveness were increased.