The future of urban areas : urban congestion and related innovation in the city of Los Angeles 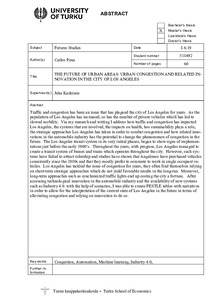 Traffic and congestion has been an issue that has plagued the city of Los Angeles for years. As the population of Los Angeles has increased, so has the number of private vehicles which has led to slowed mobility. Via my research and writing I address how traffic and congestion has impacted Los Angeles, the systems that are involved, the impacts on health, hos sustainability plays a role, the strategic approaches Los Angeles has taken in order to combat congestion and how related innova-tions in the automobile industry has the potential to change the phenomenon of congestion in the future. The Los Angeles transit system in its very initial phases, began to show signs of implementa-tions just before the early 1900’s. Throughout the years, with progress, Los Angeles managed to create a transit system of busses and trains which operates throughout the city. However, such sys-tems have failed to attract ridership and studies have shown that Angelenos have purchased vehicles consistently since the 1980s and that they mostly prefer to commute to work in single occupant ve-hicles. Los Angeles has tackled the issue of congestion for years, they often find themselves relying on short-term strategic approaches which do not yield favorable results in the long-run. Moreover, long-term approaches such as synchronized traffic lights end up costing the city a fortune. After accessing technological innovation in the automobile industry and the availability of new systems such as Industry 4.0. with the help of scenarios, I was able to create PESTLE tables with narratives in order to allow for the interpretation of the current state of Los Angeles in the future in terms of alleviating congestion and relying on innovation to do so.