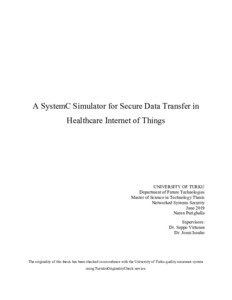 In this thesis, a simulator for secure data transfer between medical sensors and end-users is developed using smart e-health gateways in medical environments like hospitals, healthcare centers and old-age homes. The rate of adoption of Internet of Things (IoT) and the associated technology is on the rise but the security measures that accompany the said technology and the devices is not totally dependable. And the repercussions get serious when dealing with medical sensors because people’s lives are at stake.

With medical sensors, due to their resource and energy constraints, it is difficult to apply strong and heavy cryptographic techniques to achieve maximum security. The use of smart e-health gateways here eases the burden on sensors by authenticating and authorizing the end-users on behalf of the sensors. This is achieved using certificate-based DTLS handshake protocol between the gateways and the end-user. Then, for end-to-end secure communication, session resumption is carried out between the sensors and the end-users which is not as energy consuming as the
handshake.

The whole simulator is designed using SystemC, which is a library of C++ classes. It is chosen for this implementation because of various advantages it has over other hardware programming languages. SystemC, along with its verification library covers almost all aspects related to system design and modeling and the syntax of SystemC and C++ are the same. All the components of the hardware design are defined as modules here and the target is to achieve communication between
these modules.

Finally, we calculate the time it takes for a set of values to go from the sensor to the gateway and the gateway to the end-user.