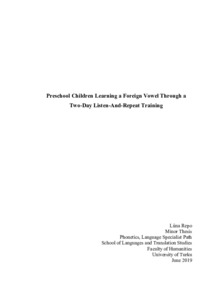 The aim of this thesis is to study how listen-and-repeat production training affects children’s ability to perceive and produce a non-native vowel, which is theoretically as challenging as possible. The non-native vowel was embedded in a pseudo-word context. The stimuli used in the study were two semisynthetic pseudo-words, /tʉ:ti/ and /ty:ti/. Primary interest was pointed to the pseudoword /tʉ:ti/, as it contained the target vowel /ʉ/ which is phonemically irrelevant in Finnish, but relevant in Swedish. The participant group consisted of 12 Finnish preschool girls, aged 6–7. The participants participated in the study on two consecutive days which consisted of two training and two recording sessions. The recorded productions were analysed acoustically to find out the first two formant frequencies of the target vowel /ʉ/ and the non-target vowel /y/. The values were then statistically analysed.