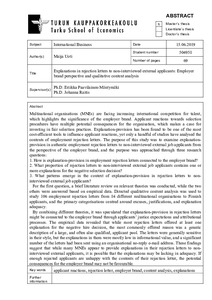 For the first question, a brief literature review on relevant theories was conducted, while the two others were answered based on empirical data. Directed qualitative content analysis was used to study 106 employment rejection letters from 84 different multinational organisations to Finnish applicants, and the primary categorisations centred around excuses, justifications, and explanation adequacy.

By combining different theories, it was speculated that explanation-provision in rejection letters might be connected to the employer brand through applicants’ justice expectations and attributional processes. The empirical data revealed that while most rejection letters offered at least one explanation for the negative hire decision, the most commonly offered reason was a generic description of a large, and often also qualified, applicant pool. The letters were generally sensitive in their style, but the explanations in them were mostly low in informational value, and a significant number of the letters had been sent using an organisational no-reply e-mail address. These findings suggest that while many MNEs appear to provide explanations in their rejection letters to non-interviewed external applicants, it is possible that the explanations may be lacking in adequacy. If enough rejected applicants are unhappy with the contents of their rejection letter, the potential consequences for the employer brand may not be favourable.