The shipmaster in remote & autonomous operations

The shipmaster in remote & autonomous operations 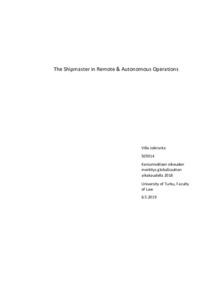 This study examines shipmasters responsibilities in remote & autonomous operations. The focus of the study is first to answer the question whether the legal status of the shipmaster can be reasonably applied onto the chief operator of a shore control centre, and secondly to discuss the issues in international and Finnish regulation that come about when such application is made.

The research concerns itself with international maritime regulative instruments as well as the Finnish maritime code. The population of the study comprises of the private actors in the industry as well as the lawmakers on national as well as international level. The aim of the study is to support the private actors of the industry in forming their remote & autonomous operations in a juridically reasonable way, and to give guidance to the lawmakers to focus on the relevant elements when discussing remote & autonomous operations in maritime law.

The research method is legal dogmatic policy analysis that is supported by qualitative interviews. The results of the research are that the legal status of the shipmaster can be reasonably applied onto the chief operator of the shore control centre, generally domestically as well as with the requirements of international law, and that when this application is made, the relevant issues are around the vessel being unmanned as well as the fulfillment of the requirement of “good seamanship”. The essential recommendations are to change the wording of the Finnish maritime code chapter 6 to better accommodate remote operations by removing the resulting incoherencies, and on the other hand to modifythe international system of certifications for seafarers to better accommodate the skills needed and not needed for remote operations. An essential recommendation for the private actors in the industry is to formulate their remote and autonomous system to include enough supervision during autonomous navigation to better ensure its acceptability, as well as close cooperation with the public authority in developing the field.