Identifying the Main Path Based on Influence Flow in Citation Network

Identifying the Main Path Based on Influence Flow in Citation Network 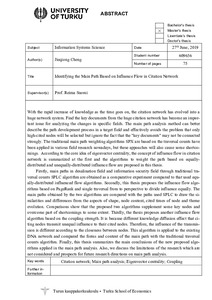 With the rapid increase of knowledge as the time goes on, the citation network has evolved into a huge network system. Find the key documents from the huge citation network has become an important issue for analyzing the changes in specific fields. The main path analysis method can better describe the path development process in a target field and effectively avoids the problem that only high-cited nodes will be selected but ignore the fact that the "key documents" may not be connected strongly. The traditional main path weighting algorithms SPX are based on the traversal counts have been applied in various field research nowadays, but these appoaches will also cause some shortcomings. According to the core idea of eigenvector centrality, the concept of influence flow in citation network is summarized at the first and the algorithms to weight the path based on equally- distributed and unequally-distributed influence flow are proposed in this thesis.

Firstly, main paths in desalination field and information security field through traditional traversal counts SPLC algorithm are obtained as a comparative experiment compared to that used equally-distributed influenced flow algorithms. Secondly, this thesis proposes the influence flow algorithms based on PageRank and single traversal from to perspective to divide influence equally. The main paths obtained by the two algorithms are compared with the paths used SPLC to draw the similarities and differences from the aspects of shape, node content, cited times of node and theme evolution. Comparisons show that the proposed two algorithms supplement some key nodes and overcome part of shortcomings to some extent. Thirdly, the thesis proposes another influence flow algorithm based on the coupling strength. It is because different knowledge diffusion effect that citing nodes transmit unequal influence to their cited nodes. Therefore, the influence of the transmis- sion is different according to the closeness between nodes. This algorithm is applied to the existing DNA network and compared the forms and content of the main path with the traditional traversal counts algorithm. Finally, this thesis summarizes the main conclusions of the new proposed algorithms applied in the main path analysis. Also, we discuss the limitations of the research which are not considered and prospects for future research directions on main path analysis.