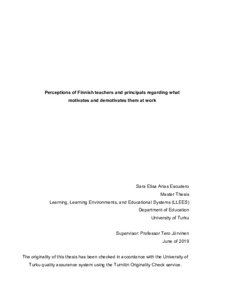 This thesis work is centered in the perceptions of four Finnish teachers and four Finnish principals from the city of Turku in Southwest Finland, about which factors motivate them in the workplace and how those factors affect their job satisfaction in positive and negative ways. The idea of working in such topic came from previous studies that have demonstrated that motivated teachers and principals could be correlated with higher academic achievements in students, and, that motivated teachers could also have an impact on pupils’ motivation to learn. However, teachers’ and principals’ motivation are not only a set of values that remain the same during the time; they are also affected by the environment and the changes in the context. For that reason, recent changes in the educational systems and its policies, like the introduction of a new curriculum or the reduction of the educational budget, could have influenced the perceptions of teachers and principals about the conditions of the workplace, as well as their motivation and job satisfaction. Attempting not to generalize but to rather have a depth understanding of the latter perceptions of Finnish educators, the qualitative approach used to investigate was phenomenology. The selection of the sample was carried out using the snowball sampling method, and the instrument of collecting data was the in-depth interview. The results showed that teachers and principals perceive that having a friendly working environment with positive relationships based on trust, commitment and autonomy, profoundly impacts their motivation towards the profession and also raise their overall level of job satisfaction. On the contrary, Finnish educators perceive as the most demotivating aspects in their jobs the lack of time for enhancing human relationships associated with hectic time tables, a new curriculum that adds more topic to be taught and demands joint planning, larger classrooms and less budget for the permanent support of special education teachers. The study suggests that Finnish policymakers and municipalities should work in reorganizing teachers and principals responsibilities taking into account the time and the relational and logistic dynamics of schools that have more hurried contexts.