The effect of chatbot introduction on user satisfaction 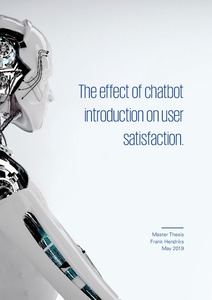 Chatbots are becoming better and better, and their skills to perfectly imitate a human-being are almost impeccable. By means of a survey experiment this paper researches the effect of the introductory message of a chatbot on the end-user satisfaction. The experiment conditions involved a chatbot introducing itself as a chatbot, a chatbot not introducing itself, and a human being as control group. Satisfaction was measured using the constructs social presence, perceived humanness and service encounter satisfaction. Findings show that an undisclosed chatbot introduction yields a higher satisfaction with both the conversation itself and the conversational partner, while for the given advice and outcome of the conversation, users are indifferent between chatbots and real human beings.