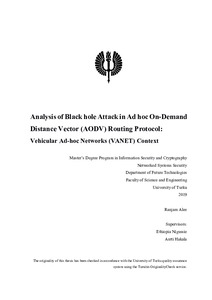 In past years, popularity of Mobile Ad hoc Networks has led to the conception of Vehicular Ad hoc Networks. These networks must be highly secure before their implementation in real world. One of the vital aspects of these networks is routing protocol. Most of the protocols in VANET acknowledge all nodes in a network to be genuine by default. But there might be malicious nodes which can make the network vulnerable to various attacks. One such attacks is a black hole attack on AODV routing protocol. Because of its popularity, AODV and black hole attack are taken into consideration for this thesis.

The aim of the thesis is to analyze effects of black hole attack on AODV and understand security need of routing protocols in VANET. The experimentation for this thesis was performed with 40, 60 and 80 nodes in network simulator (NS). The performance metrics such as average throughput, end to end delay and packet delivery ratio of each assumed scenarios under blackhole attack and with prevention method are calculated. The obtained calculations are compared to analyze the network performance of AODV.

The results from the simulator demonstrate that overall network performance of AODV increased with black hole prevention algorithm in comparison to AODV under black hole attack only. Out of all the performance metrics that are used to analyze the network performance, the average throughput of AODV is significantly increased by 21 percent (approximately) when the mitigation algorithm is applied. The prevention approach used for the thesis can make AODV perform better against black hole attack. However, this approach is limited to a small to medium sized networks only.