Seasonal variation in the physiological markers of stress in Asian elephants 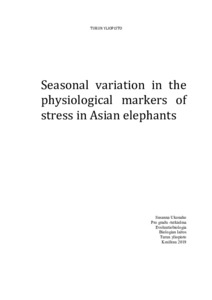 One of the fundamental concepts in evolutionary biology is to understand how the environment shapes individuals and, consequently, populations over time. However, although the basis for the relationships between environmental variation and vital rates (e.g. birth, death rates) is well-established, less is known of the physiological basis of these links in nature. This thesis aims to determine seasonal variation in different physiological markers of stress (cortisol, white blood cell ratio, oxidative stress levels and body weight) in a large semi-captive population of Asian elephants (Elephas maximus) employed daily in timber industry but foraging naturally in forests at night. Longitudinally measured cortisol, HL ratio and oxidative stress levels were extracted from 286-1712 fecal and blood samples of 88-209 elephants, depending on the marker. The elephants showed higher cortisol levels and HL ratios during cold season, indicating increased stress, and the lowest levels during monsoon season. There was an opposite pattern in oxidative stress (ROS) levels, where the highest ROS damage was observed during monsoon and the lowest during cold season. Based on these results, the damage from seasonal stress seems to accumulate slowly over time and shows only later in life. Further, the models showed a significant decline on body weight during hot season. This decline in body weight is likely to be caused by seasonal variation in food abundance, which also declines during hot season. Understanding how seasonal variation affects the Asian elephant population may help improving their working conditions, and more generally the conservation of these endangered animals.