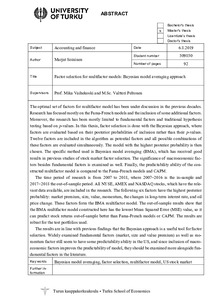 The optimal set of factors for multifactor model has been under discussion in the previous decades. Research has focused mostly on the Fama-French models and the inclusion of some additional factors. Moreover, the research has been mostly limited to fundamental factors and traditional hypothesis testing based on p-values. In this thesis, factor selection is done with the Bayesian approach, where factors are evaluated based on their posterior probabilities of inclusion rather than their p-values. Twelve factors are included in the algorithm as potential factors and all possible combinations of these factors are evaluated simultaneously. The model with the highest posterior probability is then chosen. The specific method used is Bayesian model averaging (BMA), which has received good results in previous studies of stock market factor selection. The significance of macroeconomic factors besides fundamental factors is examined as well. Finally, the predictability ability of the constructed multifactor model is compared to the Fama-French models and CAPM.
The time period of research is from 2007 to 2018, where 2007−2016 is the in-sample and 2017−2018 the out-of-sample period. All NYSE, AMEX and NASDAQ stocks, which have the relevant data available, are included in the research. The following six factors have the highest posterior probability: market premium, size, value, momentum, the changes in long-term interest rate, and oil price change. These factors form the BMA multifactor model. The out-of-sample results show that the BMA multifactor model constructed here has the lowest Mean Squared Error (MSE) value, so it can predict stock returns out-of-sample better than Fama-French models or CAPM.
The results are robust for the test portfolios used. The results are in line with previous findings that the Bayesian approach is a useful tool for factor selection. Widely examined fundamental factors (market, size and value premium) as well as momentum factor still seem to have some predictability ability in the US, and since inclusion of macroeconomic factors improves the predictability of model, they should be examined more alongside fundamental factors in the literature.