Foreigners as Narrators of National History : The Role of Translation in Finnish Historiography of the Continuation War 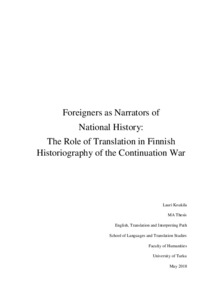 The subject of this thesis is the role of translation in Finnish historiography of the Continuation War. The important early role of three Anglo-American historians, C. L. Lundin, A. F. Upton, and H. P. Krosby, in the study of this subject is almost universally recognised in Finnish historiography. However, the fact that their studies had to be translated before they could properly become part of the Finnish discourses has thus far been largely ignored.

This thesis focuses on the Finnish translations of four influential studies by the aforementioned historians, but rather than studying the translated texts themselves, it seeks to contextualise them by looking into multiple different types of texts related to them (collectively known as paratexts), including reviews, advertisements, and translator’s footnotes, as well as bibliographical information about the publishers and the translators. The purpose of this interdisciplinary study is to contribute the missing translation-related details to an otherwise thoroughly researched topic. The thesis also presents a concise overview of the Finnish historiography of the Continuation War to properly situate these studies within it.