Danish-Russian relations in the Arctic 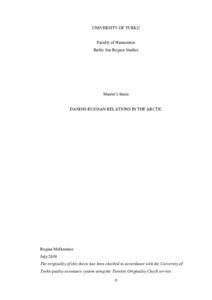 This thesis explores the main trends and drivers of the relationship between states of the Kingdom of Denmark and the Russian Federation in the Arctic in 2007-2019. The research topic belongs to the International Relations study, and its sub discipline named foreign policy analysis. The aim of the thesis is to enrich the present bulk of research on Danish-Russian relations in the Arctic due to its scare amount and the increasing significance of the Arctic in international relations. The entire analysis is based on neo-realism and geopolitics premises. The topic is approached through analyses of such areas as Arctic governance, economy, military sector, science and the environment.

The research applies the qualitative document analysis. The broad range of primary sources contains laws, strategies and concepts adopted by Danish and Russian authorities; international agreements; speeches, addresses, interviews and comments of Danish, Russian and other relevant politicians and officials; as well as reports and publications from governmental and non-governmental organizations, research institutes, corporations and media featuring Danish-Russian relations in the Arctic and the Arctic itself. The material includes information published in English, Danish, German and Russian. The desktop (Internet) research technique is utilized in the study. Comparative analysis, case study analysis and process tracing analysis are the main methodological tools.

The thesis reveals that the main drivers of Danish and Russian Arctic policies are determined by their endeavor to enhance power capabilities and by their positions in the international system. Both states share cooperation mood in the Arctic. This cooperation can be traced in all sectors at larger or lesser extents. Meanwhile, Danish-Russian relations experience the pressure of the global level. The current tension between such great/super great powers as the US, the EU and Russia has its spillover effect on Danish-Russian relations in the Arctic, which hinders their cooperation. Still, by and large, relations among great/super great powers in the Arctic region are of peaceful nature that create a real possibility for cooperation between Denmark and Russia in the nearest future.