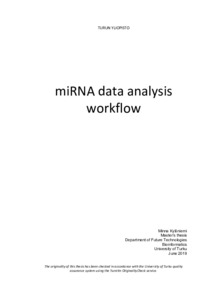 Micro RNAs (miRNA) have been shown to regulate many biological processes by silencing the expression of their target genes. They are small non-coding RNAs that have been found in all types of organisms from eukaryotes to viruses. It has been shown that one miRNA can have several target genes and on the other hand, one gene can be targeted by several different miRNAs. Thus, the analysis of miRNA data is complicated. The aim of this project was to develop a workflow for miRNA functional analysis and test its functionality with some published datasets.

For the functional analysis, two different tools were tested. First one of these, R/Bioconductor package mdgsa is based on gene set enrichment analysis. The other one, BUFET is a python script that performs overrepresentation analysis with empirical correction for bias that is often observed in miRNA functional analysis. For the testing of these algorithms, datasets from three different publications were used with miRNA target predictions from various sources. As expected, the results from different approaches differed both from the original publications and from each other. One reason for the differences observed in results compared to those of the original method publications was the different target prediction database that was used here.