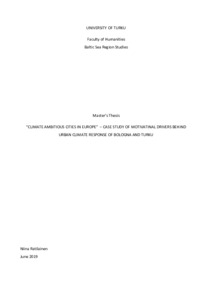 Repelling global warming is no longer a question of political agreements under the United Nations and among nation states. From the beginning of 2000, cities have globally stepped up in the vanguard of the battle against climate change. This thesis concentrates on cities and motivation behind climate policy targets of urban climate governance.

Why have cities set challenging climate targets that even more ambitious than similar targets of their nation states? To find out reasoning, I have sought to unwrap the theme of urban climate governance and environmental motivation with the assistance of perceptions of two case cities and drivers behind their climate policies and targets. These cities are Finnish city Turku, which aims to reduce greenhouse gas emissions and become carbon neutral, along with Italian Bologna, which has
drawn a comprehensive adaptation plan of climate change. Remarkably, the before mentioned cities have set stricter goals than their states in a similar field. Additional to findings of case cities, thesis leans upon previous results of climate and environmental motivation in cities.

Through categorization of five motivational drivers: economic, ecological and liveability, political and cultural, framing and social, I have sought to explain, what kind of drivers have spurred cities for the collective expression of climate motivation and to establish climate policy objectives.

This thesis explains how urban actors are motivated to take action in a global environmental challenge, which by no means is required field of policy practice. Case cities Turku and Bologna display rich insight on motivation towards policies, which aim to greenhouse gas emission reductions and adapting to climate-induced changes. Despite different goals, distinct drivers often coexist in harmony. Reasons for urban climate action in municipalities are multifaceted and plenty.
Objectives are both in the prevention and creating new possibilities. Justifications vary between benefits for the local community to doing one’s share in global responsibility. Overall, mitigation policies are less justified with environmental and liveability than adaptation, and more often, drivers of economy and framing have a decisive role.

By defining targets and measures, case cities have been able to create governability over the global issue. These cities have managed to turn global warming into wholeness, which impacts the urban environment, and local measures can be separated. In overall picture, without urban climate action, repelling global warming is next to an impossible task.