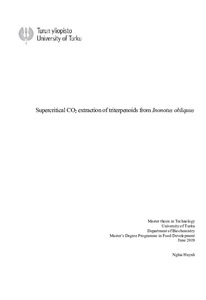 Inonotus obliquus (Fr.) Pilát, is a basidiomycete, which can be found mainly above the 40th
parallel north of Europe, Asia and America. The usage of the sterile conk, also known as Chaga,
as folk medicine in Baltic countries goes back to the 17th century. Traditionally, Chaga extracts
have been used for treating cancer. Chemical investigations have shown that Chaga contains high
quantities of bioactive compounds such as triterpenoids, which have been connected to the health
benefits and immuno-modulating effects of Chaga.
Supercritical fluid extraction (SFE) of Chaga was carried out with pure CO2 to recover
triterpenoids, while a modified Folch extraction method was used as comparison. Along with the
extraction, one of the main purposes of this work was to determine the optimal extraction
parameters for SFE by analysing the compositions of the extracts. The main attractions of SFE
are less laborious and time-consuming operation but also the fact that hazardous solvents can be
omitted from the extraction process. The high selectivity and inert nature of CO2 also makes it
possible to target and remove certain substances from the sample material without remarkably
affecting the structure of the material. Three temperature-pressure combinations were tested in
SFE varying between 40-50°C and 281-350 bars, in order to find suitable conditions for
triterpenoid extraction. The extracts were saponified and the recovered triterpenoids analysed as
trimethylsilyl (TMS) ethers. A gas chromatographic system coupled with flame ionization
detector (GC-FID) was used for quantification, while mass spectrometry (GC-MS) was used for
the identification.
Six sterol and triterpenoid constituents were identified and quantified from supercritical fluid
(SF) extracts: ergosterol (17.9±1.3 mg / 100 g dry weight), lanosterol (65.5±7.2 mg / 100 g), β-
sitosterol (3.6±0.5 mg / 100 g), stigmastanol (1.4±0.1 mg / 100 g), betulin (13.2±4.3 mg / 100 g)
and inotodiol (97.7±11.5 mg / 100 g). Folch extracts produced higher yield in ergosterol (36.7±1.5
mg / 100 g), inotodiol (127.7±5.5 mg / 100 g), betulin (34.7±4.2 mg / 100 g), lanosterol (74.1±1.0
mg / 100 g), β-sitosterol (5.0±0.4 mg / 100 g) and stigmastanol (1.8±0.2 mg / 100 g). The
difference was found to be statistically significant between Folch method and SFE (p < 0.05).
Trametenolic acid was found only in Folch extracts, in relatively high amounts (44.8±1.0 mg /
100 g).
Despite the lower yield obtained by SFE, this method showed several advantages including
significantly shorter extraction time and production of solvent waste. This work could be a
starting point for further studies on green extraction methods of bioactive compounds from
Finnish natural resources. The utilized methods can be further developed to achieve more
efficient extraction conditions compared to Folch method.