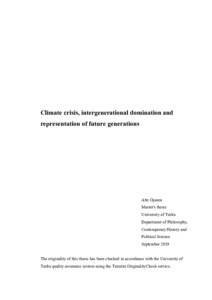 Current democratic decision-making is systematically biased in favor of the present people, due to various psychological and institutional factors. Humans are short-termist by nature and willingly discount the interests of future generations, as exemplified by the climate crisis. This thesis argues that climate change is not only a global coordination issue, but an instance of intergenerational domination, in which the present generation subjugates and violates autonomy of future generations. The technological progress has made it possible for us not only to affect posterity, but to arbitrarily determine the conditions of their actions, thereby dominating them. Future generations are vulnerable and without recourse against unconstrained power of the present people. This violates fundamental human interest in autonomy and self-determination. This expansive conception of domination is defended against neorepublican objections. Intergenerational domination is an insidious structural injustice permeating our institutions and even many of the supposed remedies to climate change, such as geoengineering.

I argue that intergenerational domination can only be overcome by instituting accountability and limiting the arbitrary power of the present generation. This can be achieved by granting the otherwise voiceless future generations representation in decision-making. However, this has to be done carefully not to violate democratic rights of current people. Due to uncertainty, human biases and legitimacy concerns, I argue that public deliberation is our best option to institutionalize representation for posterity. This deliberation is aimed at protecting autonomy of future generations and empowering them to exercise their democratic sovereignty in the future. Central to deliberation is educative perspective-taking and public reason-giving that encourage people to adopt the viewpoint of posterity. Deliberation also holds present people discursively accountable to the future by incentivizing them to justify their decisions to posterity as if they were present today. Evidence from deliberative mini-publics indicate that they do indeed lead to more long-term policies and consideration of future generations' interests. Public deliberation therefore strikes an ideal balance between effectiveness and democratic legitimacy of representing posterity.