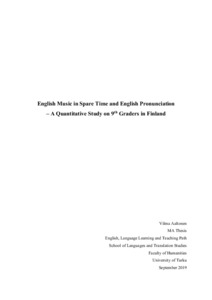 Today, music is a familiar component of people’s daily sound environment, and a significant amount of popular music contains English vocals. It has been established by various studies that music can aid language learning, but the studies have mainly been concerned with the effects of purposefully using music to boost learning. The aim of this study, however, was to investigate whether it is possible to acquire English pronunciation through listening to English music (= music with English vocals) and singing in English during one’s spare time without the intention of learning. The study examined 44 lower secondary school English students in Southwest Finland via a questionnaire and a picture description task (PDT). The PDT produced speech samples that were evaluated by a jury of nine native speakers of English based on three pronunciation criteria: accuracy, fluency, and intelligibility. The results of the study suggested that the English music people consume in their spare time could actually be beneficial for the development of their English pronunciation both directly and indirectly. The direct factors included natural language input and versatile output opportunities, whereas the indirect factors had to do with music’s capability to influence the learner’s motivation and affect, such as mood and attitudes. Especially singing in English seemed to be linked to better English pronunciation. The aim of this study is to inform people about the subconscious benefits of the day-to-day English music consumption as well as to encourage English learners to engage in English language music if they wish to improve their English pronunciation.