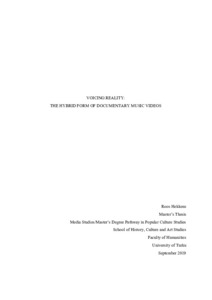 The heterogeneity and flexibility of form allows for documentary elements to integrate with music video characteristics. This study examines how documentary music videos can be defined. Furthermore, it looks at different functions documentary elements can add and how these videos can find a way to give an authentic representation of reality. In addition, this study attempts to understand the meanings that can be created by the synergy between these two divergent audiovisual forms by means of two case studies.

The videos selected for this study are “Hidden Wounds” by dEUS and “Wyclef Jean” by Young Thug. These cases are studied through close reading and with focus on the concepts of music video aesthetics, documentary conventions and the potential of hybridity. By looking at the conventions and expectations we have about documentary and music videos, this study tries to understand how these videos voice reality.