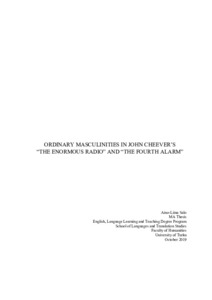 This MA- thesis focuses on the study of John Cheever’s works “The Enormous Radio” (1947) and “The Fourth Alarm” (1970) using masculinity theory as the lens for the close analysis of the short stories. The study aims to highlight the issues of patriarchal society and its repercussions on men, drawing attention to the different roles a man has to play in order to uphold his position of hegemony in society, including the roles of a father, husband and the breadwinner.
The theoretical background for this work is based on Raewyn Connell and Michael Kimmel’s as well as other gender studies theorists’ works. Raewyn Connell’s theories about the plurality of masculinities, hegemonic masculinity and the relations between genders are discussed thoroughly. Kimmel’s research on American masculinities in the 20th century is used as a background for the analysis of the different struggles that men face in the context of 20th century USA.
The main outcomes of this thesis prove that the patriarchal society is harmful for both men and women. The two main characters discussed in the study represent different reactions to the same types of changes in society. Both reflect the difficulty of upholding a hegemonic position and performing the roles that are expected of them. These findings represent the changes that men are still going through in society and are therefore still important in today’s discourse about gender and gender roles.