Code-switching between English and French in The Montreal Gazette

Code-switching between English and French in The Montreal Gazette 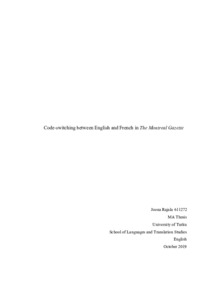 This minor master’s thesis discusses code-switching from English to French in The Montreal Gazette, the main English-language newspaper in the Canadian province of Quebec. The focus of the study is on marked code-switching, in which the usage of French acts as a metaphor or symbol of social relations instead of just filling pragmatic or lexical gaps of the English language. The purpose of the study is to examine whether English¬–French code-switching in the Quebec anglophone press is more motivated by solidarity towards or divergence from the francophone commu-nity, i.e. if code-switching is more positively or negatively motivated.

The corpus of the study consists of 481 opinion articles published in The Montreal Gazette from 1st March to 15th June 2019. After an initial spotting of code-switching by close-reading the articles, the Markedness Model by Carol Myers-Scotton was used to divide code-switches into marked and unmarked ones; thereaf-ter, context-based interpretation was used to divide marked code-switches into those motivated by solidarity and those motivated by divergence. In total, 61 articles, i.e. some 12.7 per cent of the whole corpus, include marked code-switching. This code-switching is motivated by solidarity in 20 articles and by divergence in 21 articles. Even though the difference in the prevalence of positively and negatively motivated code-switching is small, the latter is more coherent since French is employed to highlight lines of political and identity-related division in Quebec. A third, surpris-ing category consists of established French loanwords that are part of international English and that are used in a marked way.

When the third category is added to the count of articles containing marked positively and negatively motivated code-switching, French is used for solidarity in 28 articles and for divergence in 37. First, the small number of proper code-switches arising from Quebec French suggests that the marked usage of French is rather mar-ginal in Quebec English. Second, the prevalence of markedly used, established French loanwords in the corpus suggests that international French has continued prestige in the Quebec anglophone community. Thus, it would be interesting to study whether established French loanwords are more common in Quebec English than in monolingually English-speaking communities.