English Pronunciation Development of Finnish Upper Secondary School Students: A Study on the Influence of a Seven-Week Spoken English Course to the Pronunciation of Sibilants and Intonation

English Pronunciation Development of Finnish Upper Secondary School Students: A Study on the Influence of a Seven-Week Spoken English Course to the Pronunciation of Sibilants and Intonation 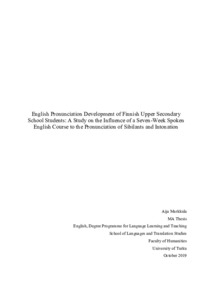 This thesis examined the changes in English pronunciation regarding segmental and suprasegmental features of upper secondary school students during a spoken English course. Sibilants and intonation were chosen as the features that were rated by the Finnish teachers of English. The research strived to answer the following research questions: ‘How does an English spoken course in upper secondary school influence the pronunciation of sibilants of Finnish learners of English according to English teacher ratings?’ and ‘How does an English spoken course in upper secondary school influence the intonation of Finnish learners of English according to English teacher ratings?’. The issues were approached through a quantitative method and, in addition, a brief qualitative section will be presented to give support to the statistics. First, 20 Finnish upper secondary school students learning English were randomly selected. It was important to keep the number of participants fairly low to be able to also keep the duration of the evaluator questionnaire to a reasonable length. The questionnaire was built of several background information questions and 40 speech samples in which the evaluators rated the participants’ pronunciation on a 0–100 continuous scale. After collecting responses from 25 Finnish teachers of English, statistical analysis was conducted and analysed.
Even though the results did not show any statistical significance on the group level, there were both positive and negative changes on an individual level. The changes were positive for the sibilant /s/ and intonation and like previous studies have showed, the pronunciation of voiced sibilants was poor before and after the spoken English course. The overall pronunciation ratings showed that more than half of the students were able to develop their overall pronunciation skills during the course. The evaluators’ answers to open-ended questions revealed that suprasegmental features were commented significantly more compared to segmental features. Based on the results, more emphasis should be put into teaching pronunciation explicitly and one course that focuses on oral skills is not enough for students to develop their pronunciation skills on either segmental or suprasegmental level. It is suggested that further research on pronunciation teaching would start from earlier ages and lower grades, as well as adding explicit pronunciation instruction to the teaching of English and investigating that in all ages.