“Sehnsucht” for the spiritual pagan homeland in neofolk: a study on the deviant white subculture

“Sehnsucht” for the spiritual pagan homeland in neofolk: a study on the deviant white subculture 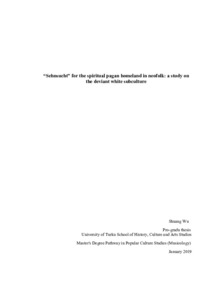 Emerging from various of roots such as punk rock, folk revival, and industrial music, the concept of neofolk music is complicated from the start. With its subtle ways of musical expression and themes that heavily stranded in the pagan past, Neofolk is one of the genres where European musicians often attempt connect with their roots through remixed mythologies, certainly stirs the water for European paganism music.
The study intends to exam neofolk music as a cultural phenomenon and investigates the foundations that have been observed in the genre. Additionally, extreme metal has presented a similar case in comparison with neofolk, on their roots, musical mentality and transgressiveness. The essential part of the research focuses on the controversial factors of neofolk. Another attempt is to introduce an open concept for enthusiasts to understand the highly elite nature. The study’s aim, in the end, is to lengthen the topic to the reception of paganism and relevant bands, in hope of revealing a more wholesome picture of this milieu. Ethnographic interviews under a semi-structured were taken through a selection of people, who were considered to offer valuable insights to this very topic.
The research discovered that neofolk is not progressive music that complies with many modernist values. In general, it is highly nostalgic, and it sometimes builds a dangerous stance that is easily exploitable for real political extremists. The extreme and transgressive ideas that have been developed within the milieu are often not conveying any actual political purposes and by trying to politicize the music, one would lose its artistic aura. As paganism and European mythologies have already been politicalized by extremists, it is important for musicians and critiques to look beyond the European traditional border and bring in different points of views. Hence, in the end, the study suggests that besides criticizing, a revisit of neofolk-alike white pagan subculture is much needed before the political extremists have completely hijacked the narrative.