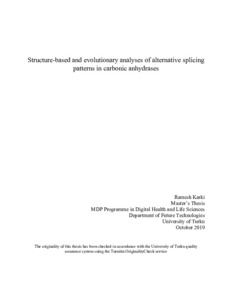 Alternative splicing is a biological process which generates multiple distinct mature mRNAs from a single primary transcript. Several isoforms of alpha carbonic anhydrase exist due to this phenomenon which are categorized into several subgroups (cytoplasmic, mitochondrial, secreted, membrane-associated/extracellular, CA-related proteins). The research investigates and analyzes the missing/extra exon pattern in these isoforms. The transcript information of each CA gene of human and mouse was extracted using ensemble database. Protein-coding isoforms were then classified based on the presence of signal peptide, complete catalytic domain, active site, metal-ion binding site and TM helix. Ensembl database flags (such as APPRIS, GENCODE basic, TSL) and catalytic domain structure was observed to find out principle isoforms for each CAs. EST and cDNA evidence for missing/extra exon was examined for each principle isoforms using ensemble and Genomic browser. Structural feasibility of the isoforms with missing/extra exons was studied. The result shows that human and mouse extracellular and secretory CAs have extra/missing exons in various exon positions. Some of these exons are within catalytic domain and some in the linker region after the catalytic domain and before the transmembrane helix. Transcripts like human CAXII and mouse Car XIV have missing 9th exon between catalytic and transmembrane domains which implies the possibility of function-altering variant. The CA XII transcript with missing 9th exon (11aa) seems to be common in astrocytomas (type of cancer that forms in brain or spinal cord). There are no evidence of missing/extra exons in cytoplasmic and mitochondrial CAs. Ensembl shows no evidence of missing/extra exons in extracellular and secreted CAs of zebrafish and cow (not enough data for these species). Homologous missing/extra exons in human and mouse in specific groups of CAs (i.e. extracellular and secreted) confirm the biological relevance of the pattern to some extent. Further studies are needed to fully understand and confirm evolutionary significance of this pattern.