Attitudes towards the Role of English and Their Effect on Performance: A Comparative Study of Non-Finnish and Finnish Language Background EFL Learners

Attitudes towards the Role of English and Their Effect on Performance: A Comparative Study of Non-Finnish and Finnish Language Background EFL Learners 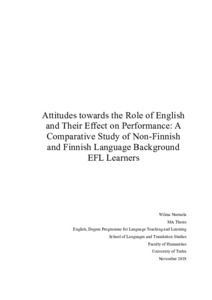 In this master’s thesis, the attitudes towards the role of English in Finland of learners with a non-Finnish and Finnish language background were studied. Additionally, given the well-established connection between attitudes and performance, another aim of this study was to see whether the attitudes of the learners with two different language backgrounds reflect their performance in English.

The participants of the study consisted of two groups of 9th graders: 27 learners with a non-Finnish language background (N-FLB) and 27 learners with a Finnish language background (FLB). The participants filled a questionnaire with three parts: questions related to their background information, attitudinal statements (utilizing a Likert-scale and two open-ended questions) and a vocabulary test, which was used as a measurement of performance in English. Attitudinal statements consisted of three categories: the importance of English in personal life, the role of English in Finnish society and the future of English in Finland. The data were analysed statistically and by using qualitative content analysis.

The results of the study indicated that learners from both groups had positive attitudes towards the role of English in their personal lives and society and that there are very few significant differences between the groups. Learners also agreed that the role of English will grow in Finland in the future. There were some differences between the groups, however. Additionally, when analysing whether the attitudes correlate with the performance, the results show that there was a stronger positive correlation between variables for learners from FLB.

Even though there were only a few significant differences between the groups, the learners from N-FLB had more positive views about the role of English in Finland. These results suggest that despite the home language of the learner, the learners agree on the importance of English and believe to use it in the future. Based on the results of the study, the correlation between attitudes and performance was positive for both groups but higher and more statistically significant for FLB. To attain a similar correlation of the learners with non-Finnish language backgrounds, more pedagogic research is needed.