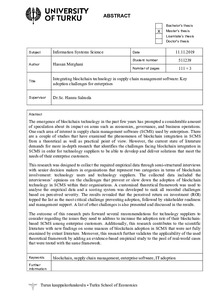 The emergence of blockchain technology in the past few years has prompted a considerable amount of speculation about its impact on areas such as economies, governance, and business operations. One such area of interest is supply chain management software (SCMS) used by enterprises. There are a couple of studies that have examined the phenomenon of blockchain integration in SCMS from a theoretical as well as practical point of view. However, the current state of literature demands for more in-depth research that identifies the challenges facing blockchain integration in SCMS in order for technology suppliers to be able to develop and deliver solutions that meet the needs of their enterprise customers.

This research was designed to collect the required empirical data through semi-structured interviews with senior decision makers in organisations that represent two categories in terms of blockchain involvement: technology users and technology suppliers. The collected data included the interviewees’ opinions on the challenges that prevent or slow down the adoption of blockchain technology in SCMS within their organisations. A customised theoretical framework was used to analyse the empirical data and a scoring system was developed to rank all recorded challenges based on perceived severity. The results revealed that the perceived return on investment (ROI) topped the list as the most critical challenge preventing adoption, followed by stakeholder readiness and management support. A list of other challenges is also presented and discussed in the results.

The outcome of this research puts forward several recommendations for technology suppliers to consider regarding the issues they need to address to increase the adoption rate of their blockchain-based SCMS among enterprise customers. Additionally, this research contributes to the scientific literature with new findings on some nuances of blockchain adoption in SCMS that were not fully examined by extant literature. Moreover, this research further validates the applicability of the used theoretical framework by adding an evidence-based empirical study to the pool of real-world cases that were tested with the same framework.