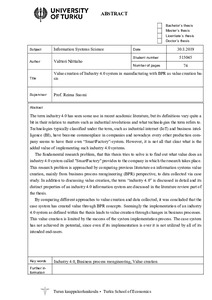 The term industry 4.0 has seen some use in recent academic literature, but its definitions vary quite a bit in their relation to matters such as industrial revolutions and what technologies the term refers to. Technologies typically classified under the term, such as industrial internet (IoT) and business intelligence (BI), have become commonplace in companies and nowadays every other production company seems to have their own “SmartFactory”-system. However, it is not all that clear what is the added value of implementing such industry 4.0 systems. The fundamental research problem, that this thesis tries to solve is to find out what value does an industry 4.0 system called "SmartFactory" provides to the company in which the research takes place. This research problem is approached by comparing previous literature on information systems value creation, mainly from business process reengineering (BPR) perspective, to data collected via case study. In addition to discussing value creation, the term “industry 4.0” is discussed in detail and its distinct properties of an industry 4.0 information system are discussed in the literature review part of the thesis. By comparing different approaches to value creation and data collected, it was concluded that the case system has created value through BPR concepts. Seemingly the implementation of an industry 4.0 system as defined within the thesis leads to value creation through changes in business processes. This value creation is limited by the success of the system implementation process. The case system has not achieved its potential, since even if its implementation is over it is not utilized by all of its intended end-users.
Key