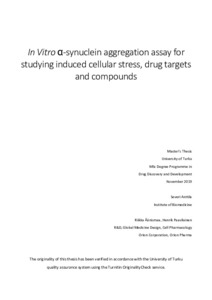 Parkinson’s disease (PD) is most common movement disorder of the central nervous system in the world. Prevalence of PD increases by age, being 3000 per 100 000 in over 70 year olds. Pharmacological treatments of PD are based on relieving symptoms. There is an unmet medical need for disease modulating or preventing pharmacological treatments.
Emerging evidence suggests that formation and accumulation of α -synuclein aggregates in dopaminergic (DA) neurons cause severe axonal and synaptic degeneration. This toxic accumulation leads to death of DA neurons and significant reduction of DA neurons lead to unbalance in nigrostriatal circuitry. By preventing α-synuclein aggregation, disease progression could be modulated. Also, α-synuclein aggregation modulation might have positive effect for other synucleinopathies: Dementia with Lewy Bodies (DLB) and multiple system atrophy (MSA), as well.
This master’s thesis describes the development of cell based in vitro α-synuclein aggregation assay for target validation and drug screening.
Monomer α-synuclein protein as such does not induce aggregation. Monomers can be transformed to Pre-formed fibrils (pFFs). This requires several days of shaking and sonication step to be transformed to pFFs which can trigger α-synuclein aggregation in cellular systems.
Several different pFFs and their ability induce aggregation were studied and α-synuclein aggregation in HEK-293 and human derived dopaminergic LUHMES cells were achieved.
The pFF induced aggregation will be studied further to optimize the setup for high throughput screening.