Upper Blepharoplasty for Dermatochalasis With or Without Resection of the Preaponeurotic and Nasal Fat Pads: A Comparative Study

Upper Blepharoplasty for Dermatochalasis With or Without Resection of the Preaponeurotic and Nasal Fat Pads: A Comparative Study 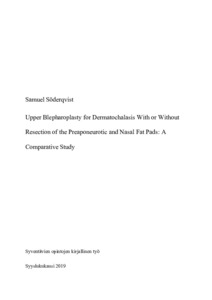 Purpose: Dermatochalasis is a skin excess in the upper eyelid and upper blepharoplasty corrects it. Blepharoplasty can be performed by removing only the excess of the skin or concomitant orbicularis oculi, preaponeural or nasal fat pads removal. The aim of this study was to investigate the efficacy of one technique over the other in order to improve safety and aesthetic results.
Methods: A comparative retrospective study was conducted in 386 consecutive patients with dermatochalasis of the upper eyelid, who underwent primary upper eyelid blepharoplasty from January 1st, 2015 to June 30th, 2017 at Turku University Hospital. Patients were divided according to the resection of preaponeurotic and nasal fat pads (study group, 51 patients) versus skin only (control group, 335 patients). Outcomes, patients’ and surgeons’ satisfaction were compared at follow-up.
Results: Operative time and return to work were significantly shorter in the control group. No significant differences in the total amount of complications were detected (7.8% vs 2.4%, p=0.075). Ecchymosis requiring further observation was significantly more frequent in the experimental group (3.9% vs 0.29%, p=0.046). Re-operation rates at follow-up were similar between the two groups. Subjective patients' satisfaction was significantly higher when preaponeurotic and nasal fat pads were resected (from 0-10, mean 8.3 vs 7.0, p=0.034).
Conclusions: Concomitant preaponeurotic and nasal fat pad resection appear to have higher patients’ satisfaction without increased complications in upper lid blepharoplasty for dermatochalasis.