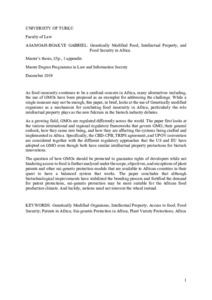 As food insecurity continues to be a cardinal concern in Africa, many alternatives including, the use of GMOs have been proposed as an exemplar for addressing the challenge. While a single measure may not be enough, this paper, in brief, looks at the use of Genetically modified organisms as a mechanism for combating food insecurity in Africa, particularly the role intellectual property plays as the new fulcrum in the biotech industry debates.
As a growing field, GMOs are regulated differently across the world. The paper first looks at the various international and regional regulatory frameworks that govern GMO, their general outlook, how they came into being, and how they are affecting the systems being crafted and implemented in Africa. Specifically, the CBD-CPB, TRIPS agreement, and UPOV convention are considered together with the different regulatory approaches that the US and EU have adopted on GMO even though both have similar intellectual property protections for biotech innovations.
The question of how GMOs should be protected to guarantee rights of developers while not hindering access to food is further analysed under the scope, objectives, and exceptions of plant patents and other sui-generis protection models that are available to African countries in their quest to have a balanced system that works. The paper concludes that although biotechnological improvements have stabilized the breeding process and fortified the demand for patent protections, sui-generis protection may be more suitable for the African food production climate. And luckily, nations need not reinvent the wheel instead.