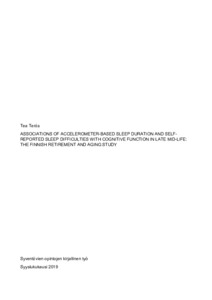 With the population aging, prevalence of cognitive deficits is increasing. To suppress this increase it is crucial to detect underlying risk factors behind cognitive deficits and enable primary prevention early enough in the life-course. Previous studies have suggested that sleep duration and sleep difficulties are associated with cognition in old age, but little is known of this association in the late mid-life. The aim of this study is to examine the associations of accelerometer-based sleep duration and self-reported sleep difficulties with different domains of cognition among aging workers.