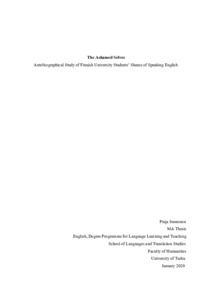 Contrary to foreign language anxiety, shame has received limited attention in the field of Second Language Acquisition. According to previous research, shame is a variable that hinders learning of a second language in a highly negative way. In addition, shame has been found to be linked with the unwillingness to communicate in the second language. Since no prior systematic research on shame in the Finnish foreign language learning context exists, this study is an exploratory study on second language shame in Finland. The focus was on English and the objective of the study was to investigate Finnish university students’ shame of speaking English. In total, six Finnish university students took part in the research.

The findings of the MA thesis indicate that there are two paths for developing the proneness to experience shame of speaking English. Some learners who have low self-esteem and high standards or goals in English seem to experience shame because they do not reach their objectives. On the other hand, some learners seem to develop shame due to their past experiences of receiving corrective feedback or experiencing traumatising treatment in instructional settings. An analysis of the autobiographies also revealed that factors such as inferiority to others, Finnish interlocutors and difficulties in English pronunciation were related to university students’ proneness to experience shame in various situations. Students also exhibited coping behaviour to shame. The most prevalent way to cope with shame was to avoid speaking English and English-speaking situations.

The study also indicates that shame must be studied more in the future since it seems to interfere with university students’ academic decision-making by lowering their course options at university. Therefore, shame of speaking English does not only hinder learning of English, but it also appears to undermine students’ overall academic outcomes.