The Relationship between L1 Fluency and L2 Fluency in Writing : a Mixed Methods Study of the Writing Fluency of the Finnish Learners of English by Using Keystroke Logging Data

The Relationship between L1 Fluency and L2 Fluency in Writing : a Mixed Methods Study of the Writing Fluency of the Finnish Learners of English by Using Keystroke Logging Data 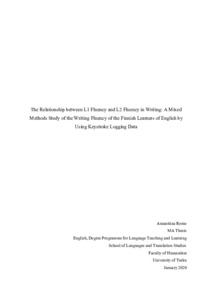 Second language (L2) fluency has been a widely researched topic in the field of SLA for many years. However, it is only recently that researchers have become interested in the possible effects of the first language (L1) on the L2 fluency, which means that these connections are still relatively poorly understood. Thus, the aim of this thesis was to explore the relationship between L1 and L2 fluency, focusing especially in writing fluency, which has been a neglected area of research compared to spoken fluency studies.
The research employed a mixed-methods approach to investigate the issue, where the quantitative analysis of different fluency measures was complemented with a more in-depth qualitative analysis of the fluency features of the essays. The data consisted of essays written by 16 Finnish upper-secondary school students in their L1 (Finnish) and L2 (English) by means of a keystroke recording tool ScriptLog. The samples were examined with the help of various writing fluency measures, which were based on participants’ pausing and revision behaviour. The essays were then analysed qualitatively by using a writer profile categorization. The results revealed positive statistically significant correlations on three of the measures: the number of pauses, the mean length of pauses and P-Burst. The regression analysis further supported the findings by indicating that the L2 fluency measures could be predicted from the equivalent L1 measures to some extent. The findings of the qualitative analysis showed that seven out of 16 participants shared similar composing processes in their L1 and L2. Thus, the findings together suggest that there is a link between L1 and L2 writing fluency to some degree, which should be acknowledged in future studies which focus on different factors affecting L2 fluency. In addition, the results of the present study can be used in teaching contexts by facilitating learners’ L2 writing and as a help of L2 fluency assessment.