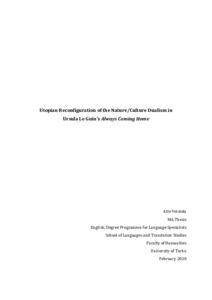 This thesis examines the intersection of utopia and ecology in Ursula Le Guin’s science fiction novel Always Coming Home (1985). As such, the thesis approaches the text from the theoretical frameworks of ecocriticism and utopian studies. By examining the text from these points of view, the thesis presents Le Guin’s novel as a particularly ecological utopian text. Thus, the thesis emphasizes the ways in which the novel’s ecological depictions and worldview influence its utopian speculation while also contributing to the novel’s critical approach to utopia.

At the center of the analysis lies an ecocritical examination of the novel’s portrayal of the relationship between its utopian society and its non-human environment. These depictions are examined particularly in terms of their reconfiguration of the anthropocentric, dualistic view of nature and culture. As a result of this reconfiguration, the novel’s ecological worldview emerges as one that emphasizes the interconnectedness and interdependence of the human and the non-human. This ecological worldview is argued to contribute significantly to the novel’s utopian rhetoric.