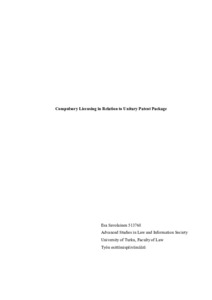 This study takes a thorough look at compulsory licensing in the EU and its future under the new Unitary Patent system. Essentially, patents are a cornerstone of intellectual property and competition, while compulsory licensing has served as an important exhaust pipe and insurance in many cases; ensuring better public reach for inventions and innovation in general. In effect, the new unitary patent will be a single patent encompassing all participating Member States, as opposed to the current EU patent, which practically is a bundle of national patents.
Yet the new Unitary Patent system of the EU has been seemingly created with such haste that compulsory licensing has been overlooked and left to Member States to regulate. However, it would appear that the Member States’ competence to limit the exclusivity of an EU level patent with national legislations could be insufficient. Effectively, this could signify compulsory licensing to be impossible in most cases in regards to unitary patents.
After familiarizing the reader with essential elements of the topic, the study aims to elaborate on the aforementioned situation. The effects of compulsory licensing (or the lack off) of unitary patents is analyzed in intricate detail, encompassing innovation, competition and market, while also providing solutions and alternatives to amend the situation.