Family Language Policy: A Qualitative Case Study on the Implicit and Explicit Practices in a Finnish Multilingual Family

Family Language Policy: A Qualitative Case Study on the Implicit and Explicit Practices in a Finnish Multilingual Family 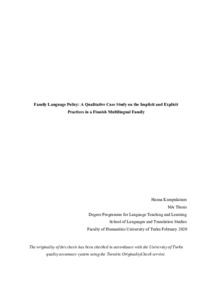 The present study is a qualitative case study on a Finnish multilingual family’s implicit and explicit family language policy, and the factors that have affected its formation. The purpose of the study is to shed light on the research in the fields of sociolinguistics and family language policy by examining implicit data in addition to the explicit data. Only recently the importance of implicit material has been acknowledged in both fields. The implicit data refers to the family members’ ‘invisible’, natural speech practices, whereas explicit data refers to the manner in which the family members describe their speech practices themselves.
The participant family of the study lives in the Southern Finland. Three languages are spoken in the family: Finnish, English and Portuguese. The family members include a Finnish mother, a Brazilian father and their two sons. The study was conducted by examining the family’s recorded spontaneous conversations, as well as interviewing the family members at their home. The following research questions were established for the study: 1. What kind of language practices occur in the everyday interaction of the family? 2. How do the family members describe the FLP and what kind of ideologies have affected its formation? and 3. How does the implicit language policy correspond to the explicit one?. The data was analyzed taking into account Bernard Spolsky’s (2004) theory on the three interrelated components of language policy: practice, ideology and management.
According to the analysis, the family’s speech practices follow an OPOL strategy – thus, the children speak a different language with each parent. Comparison of the interview and recorded conversations demonstrated that the family’s implicit and explicit language policies correspond to each other. Examining the language ideologies revealed positive attitudes towards both multilingualism and the family’s languages. English was considered the most prestigious language, which had affected the formation of the family language policy significantly. The effect of the parents’ attitude on the family language policy is in keeping with the findings of previous studies: the more positive views a parent has on the concept of multilingualism, the more probable it is for them to raise their children multilingual. Since the present study is a case study, its findings cannot be generalized. In order to gain results that offer a broader insight into family language policy in Finnish families, more families should be included in the study.