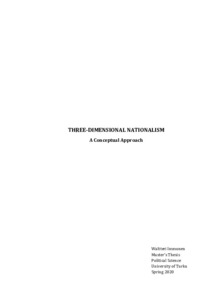 This thesis presents a three-dimensional approach of visualising and examining the phenomenon of nationalism. In this view, nationalism is seen as a modern social construction which can be subjected to critical analysis. By identifying the three respective dimensions of psychological, political, and discursive of nationalism, it is possible to create a framework with which to delve deeper into the concepts, ideas, and notions that nationalism portrays, and study the phenomenon in a more holistic manner.
The psychological dimension is the basis for concepts such as identity, ethnicity, and culture, which were found to be of key importance to nationalism. By itself, these concepts are not enough to constitute as nationalism but require a political component to make it so. This is why the political dimension is needed as it provides nationalism with such concepts as self-determination, rights, state, and sovereignty. In the third, discursive, dimension the ideas stemming from the other two are compiled and compressed into a single nationalism that can be presented as a narrative to the public arena.
With the framework the thesis presented, nationalism was found to operate in both of the realms of pluralism and monism. As the different sort of nationalisms offer people normative notions about living, behaving and thinking, they draw from the infinite pool of possible ideas and try to fuse them into a single worldview i.e. ideology that is then imposed on to the public.
With the help of the framework which this thesis argues for, it can now be studied, just what sort of a life nationalism wants people to live, and how problematic or unproblematic such a life possibly is.