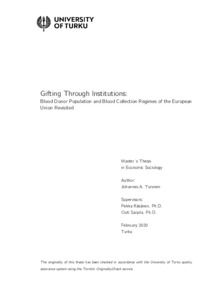 This thesis examines the gift relationship in blood donation and the role institutions play in this relationship. Using survey data that encompasses all countries in the European Union blood donation is approached with the blood collection regimes. New countries that haven’t been categorised into regimes before are categorised and analysed in the thesis. Additionally, the donor population of the European Union is examined to uncover who donate blood.

Blood is not something that is simply donated. It is collected by organisations that affect what kind of activity donation of blood is. These organisations are in a peculiar gift relationship with the people who donate blood. This gift relationship somewhat reminds that of Maussian gift of archaic tribes. Giving gifts, receiving them, and reciprocating are all parts of the relationship.

The results showed that the gift relationship is still present in blood donation. However, blood seems not strongly connected to other altruistically activity, at least on country level. Blood collection regimes still have explanatory power in explaining blood donors of the European Union. Donor population in each regime was somewhat distinct, especially compared to other country level explanations. Blood donor population showed that the donor population differs from country to another and between regimes. Blood donors are not some unique type of people who donate people. Rather, they are people who blood collecting organisations have recruited as donors.