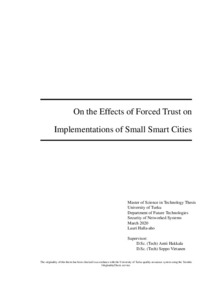 As an increasing number of cities pursue the idea of becoming smart cities, the variety in different approaches to reach this goal also grows. They cover the use of a spectrum of implementations for, inter alia, information systems, smart networks, and public services. In order to operate, these smart cities have to process multiple types of data including personal information. Ultimately, the systems and services that process these data are decided by the city with limited opportunities for their citizens to influence the details of their implementations.

In these situations the citizens have no choice but to trust their city with the operation of these systems and the processing of their personal information. This type of a relationship, forced trust, affects the smart city implementation both directly and indirectly. These effects include additional considerations by the city to guarantee the protection of the citizens’ privacy and the security of their personal data, as well as the impacts of forced trust on the willingness of the citizens to adopt the offered services.

In this thesis, privacy protection, data protection and security, system reliability and safety, and user avoidance were identified as the four major domains of concern for citizens with regard to forced trust. These domains cover most of the main impacts smart city projects have on their citizens, such as ubiquitous data collection, scarcity of control over the utilisation of one’s personal data, and uncertainty of the dependability of critical information systems. Additionally, technological and methodological approaches were proposed to address each of the discussed concerns. These include implementation of privacy by design in the development of the smart city, use of trusted platforms in data processing, detection and alleviation of potential fault chains, and providing the citizens the means to monitor their personal data.