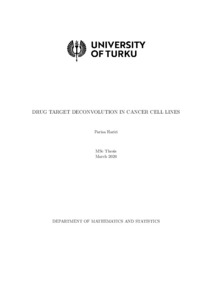 The deconvolution problem to identify the critical protein targets behind drug sensitivity
profiling is an important part of drug development. It helps us to understand
the mechanism of action of anti-cancer drugs on the cell lines through protein targets
in those cell lines. This problem can be formulated as a matrix deconvolution
problem, with two matrices for the cell-based drug sensitivity profiling and drug target
interaction data, respectively. The model needs to be solved to identify the
vulnerability of the cell lines to inhibition of critical targets.
We used drug sensitivity data for 265 anti-cancer compounds over 990 cell models
taken from cancer patients and cultivated in the lab. Using the data on interaction
of these drugs with the protein targets, we used a novel method called TDSBS
(target deconvolution with semi-blind source separation) in order to determine the
critical targets for each cell model. The critical protein targets determined using
this method were found to be clinically relevant, as we could determine that the
driver genes have higher TDSBS values compared to the non-driver genes in the cell
models. In this thesis we demonstrate a general statistical model which can be used
to identify the protein targets which are inhibited by anti-cancer drugs in drug/cell
line sensitivity experiments.