The Relationship between Motivation and Written Performance in English as a Second Language : A Quantitative Study of Finnish Upper Secondary School Students

The Relationship between Motivation and Written Performance in English as a Second Language : A Quantitative Study of Finnish Upper Secondary School Students 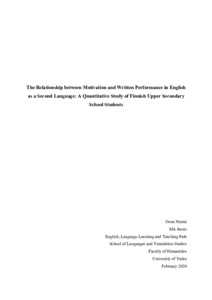 Learning a second language is a sum of different variables. One of the variables affecting language learning is motivation. The present study was concerned with the relationship between motivation to learn English and the quality of writing in English. Motivation in second language learning has been studied quite extensively but in addition to studying motivation itself, it is also crucial to examine its relationship with actual language proficiency. Thus, the aim of the present study was to shed more light on the relationship between motivation to learn a second language and the actual proficiency of language learners. There were 57 participants and they were Finnish upper secondary school students, aged from 17 to 18. As a part of the study, they filled in a questionnaire with 45 statements about their motivation to learn English and wrote a text in English, approximately 150–250 words in length. The motivation questionnaire included five different categories based on Zoltán Dörnyei’s L2 Motivational Self System, and the scores from those categories were compared with the scores from the written text. The motivation questionnaire consisted of statements regarding the participants’ motivation and they were answered on a Likert scale from 1 to 6 (1 = completely disagree and 6 = completely agree). As for the assessment of the texts, a scale to evaluate texts written in a foreign language by the Matriculation Examination Board was used as a basis for scoring the texts. It was found that the categories in which the motivation to learn English comes from within the learner, rather than from outside them (e.g. from parents), had a more positive relationship with the quality of writing. A positive learning experience was also found to have a positive relationship with writing quality. In conclusion, by understanding motivation and how it relates to language proficiency, we can learn how to teach languages more effectively.