"Think of us as symbols": Embodied Gods and Material Worship in Neil Gaiman's American Gods

"Think of us as symbols": Embodied Gods and Material Worship in Neil Gaiman's American Gods 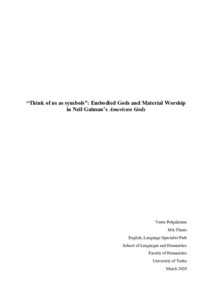 This thesis analyzes the connection between beliefs and their material representation in Neil Gaiman’s novel American Gods (2001). The aim is to show how ideas and matter converge in the creation of gods and the material ways to worship them. Each god originates from nature or man-made innovations, and their embodiment represents the material origin of the belief. Believers then worship these gods, forming a bodily and emotional connection. The analysis demonstrates how technology and science are religious belief systems that resemble traditional religions and mythologies, in addition to how the deities that represent technoscience and contemporary innovations are comparable to traditional gods. Additionally, this thesis speculates what the prevailing paradigms and their gods are in the present-day America.

The two primary frameworks this thesis utilizes are Pascal Boyer’s (2001) and Stewart Guthrie’s (1993) cognitive theories and a material theory of religion proposed by David Morgan (2010). The cognitive theories demonstrate how ideas of gods stem from nature by interpreting and discovering humanlike agencies, and the material theory of religion conceptualizes how religion’s material practices can be analyzed by focusing on body, feeling, and performance. An additional theme to consider is space which, together with Charles Taylor’s (2007) notion of immanence, finalizes the analysis of material practices. The understanding of religion is first built on William James’s (1902) division of personal and collective religion and, later on, how technoscience as a belief system resembles a religion.