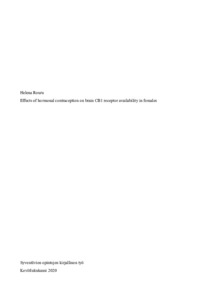 The endocannabinoid system is an important modulatory system of the brain. It consists of cannabinoid receptors type 1 and type 2 (CB1R and CB2R), the endogenous cannabinoids that bind to these receptors, and enzymes that synthetize and metabolize endogenous cannabinoids. The endocannabinoid system partakes in brain development, brain plasticity and cognitive function. It has also been associated with several psychiatric disorders. Previous studies conducted with human and animal subjects indicate that there may be gender differences in the endocannabinoid system. This difference has been suggested to be transmitted via gonadal hormones, especially estrogen.
The aim of this study was to examine whether combined oral contraception has impact on brain CB1R availability in healthy women. Somatic diseases were ruled out by laboratory tests, EKG and somatic status. Psychiatric axis I disorders were ruled out by structured psychiatric interview. MRI was done to all subjects to rule out structural anomalities.
PET-imaging were performed using the CB1R specific radioligand [18F]FMPEP-d2. Emission data was gathered first for 60 minutes, and continued for another 30 minutes after a 30 minute break. The activity of the radioligand and its metabolites in blood was measured using arterial blood samples. Continuous blood samples were taken for the first 3.5 minutes, and after that manual samples were drawn from the artery cannula. The radioligand activity concentrations in plasma were corrected to correspond to unchanged radioligand activity in each timepoint. CB1R availability was quantified using modeling of distribution volume with Logan plot. We used repeated measures ANOVA to test the difference between the groups.
In this study we found that women who used combined oral contraception had significantly lower distribution volume compared to women who did not use hormonal contraception.
Our finding supports the previous evidence of gonadal hormones affecting the endocannabinoid system. The phase of ovarian cycle was not known in all subjects and blood estrogen levels were not measured in this study. However, results indicate a need to consider hormonal pharmaceutical use and the hormonal status of human subjects when studying the endocannabinoid system.