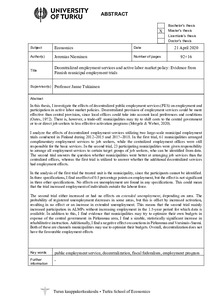 In this thesis, I investigate the effects of decentralized public employment services (PES) on employment and participation in active labor market policies. Decentralized provision of employment services could be more effective than central provision, since local offices could take into account local preferences and conditions (Oates, 1972). There is, however, a trade-off: municipalities may try to shift costs to the central government or to or direct job seekers to less effective activation programs (Mergele & Weber, 2020).

In the analysis of the first trial the treated unit is the municipality, since the participants cannot be identified. In three specifications, I find an effect of 0.5 percentage points on employment, but the effect is not significant in three other specifications. No effects on unemployment are found in any specifications. This could mean that the trial increased employment of individuals outside the labour force.

The second trial either increased or had no effects on extended unemployment, depending on area. The probability of registered unemployment decreases in some areas, but this is offset by increased activation, resulting in no effect or an increase in extended unemployment. This means that the second trial mainly increased participation in ALMPs without increasing employment in the 1.5-year period for which data is available. In addition to this, I find evidence that municipalities may try to optimize their own budgets in expense of the central government: in Pirkanmaa area, I find a sizable, statistically significant increase in rehabilitative instruction. Additionally, I find a negative effect on sanctions in Pirkanmaa and Varsinais-Suomi. Both of these are channels municipalities may use to optimize their budgets. Overall, decentralization does not have favourable employment effects.