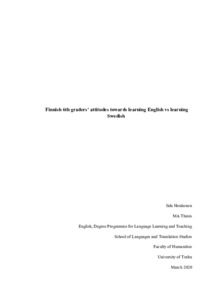 In this master’s thesis, 6th grade students’ attitudes towards learning English and Swedish were studied. The aim was to find out if the students preferred one language to the other and also to see if there is a difference in the attitudes between boys and girls.